In some form or another, machine learning is all about making predictions. We might want to predict the probability of a patient suffering a heart attack in the next year, given their clinical history. In anomaly detection, we might want to assess how likely a set of readings from an airplane’s jet engine would be, were it operating normally. In reinforcement learning, we want an agent to act intelligently in an environment. This means we need to think about the probability of getting a high reward under each of the available actions. And when we build recommender systems we also need to think about probability. For example, say hypothetically that we worked for a large online bookseller. We might want to estimate the probability that a particular user would buy a particular book. For this we need to use the language of probability. Entire courses, majors, theses, careers, and even departments, are devoted to probability. So naturally, our goal in this section is not to teach the whole subject. Instead we hope to get you off the ground, to teach you just enough that you can start building your first deep learning models, and to give you enough of a flavor for the subject that you can begin to explore it on your own if you wish.

We have already invoked probabilities in previous sections without articulating what precisely they are or giving a concrete example. Let us get more serious now by considering the first case: distinguishing cats and dogs based on photographs. This might sound simple but it is actually a formidable challenge. To start with, the difficulty of the problem may depend on the resolution of the image. 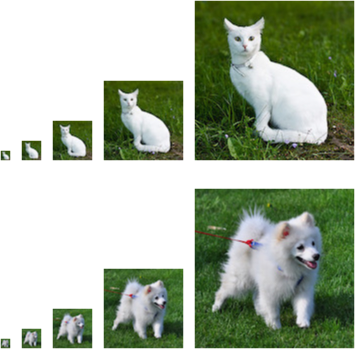 Now consider the second case: given some weather monitoring data, we want to predict the probability that it will rain in Taipei tomorrow. If it is summertime, the rain might come with probability 0.5.

In both cases, we have some value of interest. And in both cases we are uncertain about the outcome. But there is a key difference between the two cases. In this first case, the image is in fact either a dog or a cat, and we just do not know which. In the second case, the outcome may actually be a random event, if you believe in such things (and most physicists do). So probability is a flexible language for reasoning about our level of certainty, and it can be applied effectively in a broad set of contexts.

For a real die that we receive from a factory, we might not know those proportions and we would need to check whether it is tainted. The only way to investigate the die is by casting it many times and recording the outcomes. For each cast of the die, we will observe a value in \(\{1, \ldots, 6\}\). Given these outcomes, we want to investigate the probability of observing each outcome.

One natural approach for each value is to take the individual count for that value and to divide it by the total number of tosses. This gives us an estimate of the probability of a given event. The law of large numbers tell us that as the number of tosses grows this estimate will draw closer and closer to the true underlying probability. Before going into the details of what is going here, let us try it out.

To start, let us import the necessary packages.

Next, we will want to be able to cast the die. In statistics we call this process of drawing examples from probability distributions sampling. The distribution that assigns probabilities to a number of discrete choices is called the multinomial distribution. We will give a more formal definition of distribution later, but at a high level, think of it as just an assignment of probabilities to events.

To draw a single sample, we simply pass in a vector of probabilities. The output is another vector of the same length: its value at index \(i\) is the number of times the sampling outcome corresponds to \(i\).

If you run the sampler a bunch of times, you will find that you get out random values each time. As with estimating the fairness of a die, we often want to generate many samples from the same distribution. It would be unbearably slow to do this with a Python for loop, so the function we are using supports drawing multiple samples at once, returning an array of independent samples in any shape we might desire.

Now that we know how to sample rolls of a die, we can simulate 1000 rolls. We can then go through and count, after each of the 1000 rolls, how many times each number was rolled. Specifically, we calculate the relative frequency as the estimate of the true probability.

Because we generated the data from a fair die, we know that each outcome has true probability \(\frac{1}{6}\), roughly \(0.167\), so the above output estimates look good.

We can also visualize how these probabilities converge over time towards the true probability. Let us conduct 500 groups of experiments where each group draws 10 samples.

Each solid curve corresponds to one of the six values of the die and gives our estimated probability that the die turns up that value as assessed after each group of experiments. The dashed black line gives the true underlying probability. As we get more data by conducting more experiments, the \(6\) solid curves converge towards the true probability.

Formally, probability can be thought of as a function that maps a set to a real value. The probability of an event \(\mathcal{A}\) in the given sample space \(\mathcal{S}\), denoted as \(P(\mathcal{A})\), satisfies the following properties:

These are also the axioms of probability theory, proposed by Kolmogorov in 1933. Thanks to this axiom system, we can avoid any philosophical dispute on randomness; instead, we can reason rigorously with a mathematical language. For instance, by letting event \(\mathcal{A}_1\) be the entire sample space and \(\mathcal{A}_i = \emptyset\) for all \(i > 1\), we can prove that \(P(\emptyset) = 0\), i.e., the probability of an impossible event is \(0\).

Note that there is a subtle difference between discrete random variables, like the sides of a die, and continuous ones, like the weight and the height of a person. There is little point in asking whether two people have exactly the same height. If we take precise enough measurements you will find that no two people on the planet have the exact same height. In fact, if we take a fine enough measurement, you will not have the same height when you wake up and when you go to sleep. So there is no purpose in asking about the probability that someone is 1.80139278291028719210196740527486202 meters tall. Given the world population of humans the probability is virtually 0. It makes more sense in this case to ask whether someone’s height falls into a given interval, say between 1.79 and 1.81 meters. In these cases we quantify the likelihood that we see a value as a density. The height of exactly 1.80 meters has no probability, but nonzero density. In the interval between any two different heights we have nonzero probability. In the rest of this section, we consider probability in discrete space. For probability over continuous random variables, you may refer to Section 18.6.

Very often, we will want to consider more than one random variable at a time. For instance, we may want to model the relationship between diseases and symptoms. Given a disease and a symptom, say “flu” and “cough”, either may or may not occur in a patient with some probability. While we hope that the probability of both would be close to zero, we may want to estimate these probabilities and their relationships to each other so that we may apply our inferences to effect better medical care.

Using the definition of conditional probabilities, we can derive one of the most useful and celebrated equations in statistics: Bayes’ theorem. It goes as follows. By construction, we have the multiplication rule that \(P(A, B) = P(B \mid A) P(A)\). By symmetry, this also holds for \(P(A, B) = P(A \mid B) P(B)\). Assume that \(P(B) > 0\). Solving for one of the conditional variables we get

Note that here we use the more compact notation where \(P(A, B)\) is a joint distribution and \(P(A \mid B)\) is a conditional distribution. Such distributions can be evaluated for particular values \(A = a, B=b\).

Bayes’ theorem is very useful if we want to infer one thing from the other, say cause and effect, but we only know the properties in the reverse direction, as we will see later in this section. One important operation that we need, to make this work, is marginalization. It is the operation of determining \(P(B)\) from \(P(A, B)\). We can see that the probability of \(B\) amounts to accounting for all possible choices of \(A\) and aggregating the joint probabilities over all of them:

Another useful property to check for is dependence vs. independence. Two random variables \(A\) and \(B\) being independent means that the occurrence of one event of \(A\) does not reveal any information about the occurrence of an event of \(B\). In this case \(P(B \mid A) = P(B)\). Statisticians typically express this as \(A \perp B\). From Bayes’ theorem, it follows immediately that also \(P(A \mid B) = P(A)\). In all the other cases we call \(A\) and \(B\) dependent. For instance, two successive rolls of a die are independent. In contrast, the position of a light switch and the brightness in the room are not (they are not perfectly deterministic, though, since we could always have a broken light bulb, power failure, or a broken switch).

Let us put our skills to the test. Assume that a doctor administers an HIV test to a patient. This test is fairly accurate and it fails only with 1% probability if the patient is healthy but reporting him as diseased. Moreover, it never fails to detect HIV if the patient actually has it. We use \(D_1\) to indicate the diagnosis (\(1\) if positive and \(0\) if negative) and \(H\) to denote the HIV status (\(1\) if positive and \(0\) if negative). Section 2.6.2.6 lists such conditional probabilities.

Note that the column sums are all 1 (but the row sums are not), since the conditional probability needs to sum up to 1, just like the probability. Let us work out the probability of the patient having HIV if the test comes back positive, i.e., \(P(H = 1 \mid D_1 = 1)\). Obviously this is going to depend on how common the disease is, since it affects the number of false alarms. Assume that the population is quite healthy, e.g., \(P(H=1) = 0.0015\). To apply Bayes’ theorem, we need to apply marginalization and the multiplication rule to determine

In other words, there is only a 13.06% chance that the patient actually has HIV, despite using a very accurate test. As we can see, probability can be counterintuitive.

What should a patient do upon receiving such terrifying news? Likely, the patient would ask the physician to administer another test to get clarity. The second test has different characteristics and it is not as good as the first one, as shown in Section 2.6.2.6.

Unfortunately, the second test comes back positive, too. Let us work out the requisite probabilities to invoke Bayes’ theorem by assuming the conditional independence:

Now we can apply marginalization and the multiplication rule:

In the end, the probability of the patient having HIV given both positive tests is

That is, the second test allowed us to gain much higher confidence that not all is well. Despite the second test being considerably less accurate than the first one, it still significantly improved our estimate.

To summarize key characteristics of probability distributions, we need some measures. The expectation (or average) of the random variable \(X\) is denoted as

When the input of a function \(f(x)\) is a random variable drawn from the distribution \(P\) with different values \(x\), the expectation of \(f(x)\) is computed as

In many cases we want to measure by how much the random variable \(X\) deviates from its expectation. This can be quantified by the variance